It was a surprise and a relief to receive a Facebook generated post from my friend in Orlando that said she was okay.  Say what you will about social media, in this case it was cause for gratitude that word of someone’s safety came so quickly.  Sadly, many would not post a safety message.  The news that came with Sunday morning was unimaginably tragic.  The natural response is to immediately begin to make sense of the senseless and words began to pour forth from every corner of the country attempting to answer the ageless question “why did this happen?”

It is understandable that we quickly respond with words to offer comfort; words are our primary mode of communication.  We want to say something that will ease the shock and trauma of terrible tragedy.  Many religious leaders issued statements of support for Orlando victims and condemnation of violence.  Social media was ablaze with commentary on society, the human condition, guns, sexuality, and violence.  I even got into the mix by posting the rhetorical question, “What the hell is wrong with us?”

Some responded to my rhetoric with Bible verses about sin or violence, most recognized it as rhetoric and did not respond at all.  As I thought about the variety of responses to this murderous event and the untold lives that are now affected by it, I questioned what would be an alternative response.  And then I thought of Job and his friends.

When Job’s friends heard of the multiple catastrophes he had suffered, they left their homes and went to console and comfort him.  Upon seeing his great misery they lifted up their voices and wept.  “They sat with him on the ground seven days and seven nights, and no one spoke a word to him, for they saw that his suffering was very great.” (Job 2:13)  The first to speak was Job himself.

The friends were without words because ‘they saw that his suffering was very great’.  They wept, sat, and kept silent.  That is the best thing one can do in the dark moment after the trauma.  There will be a time for words but they can wait.  Even after waiting, when Job’s friends did speak, their attempts to explain the loss and pain of his life were dis-consoling and dis-comforting. The rush to ‘make sense’ is the Achilles’ heel of many good intentions.  What if there is no ‘sense’ to make?  What if the ‘sense’ takes time to work itself out in the deepest part of each individual?  What if ‘suffering’ is ultimately a mystery that refuses an answer of words?

A few days ago my friend in Orlando posted again.  I share it here with her permission:

“I am listening to the violent strokes of thunder outside where I am staying in Orlando. As a child I would say God is bowling tonight and that’s a strike when the thunder crescendoed. Tonight all I can make of the thunder is God looking down with a heavy heart at what happened early Sunday a.m. and the thunder feels like a lament of sadness…no words can express. Only the constant sound of pounding as a Father beats his chest in anger and sadness.”

How do you make sense of the tragic in your life?

How can you communicate when there is such sadness “no words can express”?

How do you experience God in the thunder? 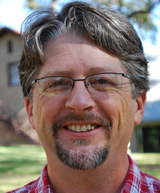