What Does their Silence Mean?

“So they went out and fled from the tomb, for terror and amazement had seized them; and they said nothing to anyone, for they were afraid.” Mark 16:8

Historical critics used to argue that the tradition of the discovery of the empty tomb by the women followers of Jesus was secondary to the resurrection appearances to the male disciples and that it was these scenes, when Jesus appears to talk and eat with the disciples, that are the source for resurrection faith. However, Jane Schaberg’s work has persuaded me that the faithful women, prepared by their experience with Jesus, would have been provoked to insight by the shock of the empty tomb.1

Resurrection faith began here at the tomb with Mary Magdalene, Mary the mother of James, Salome. We can read their silence not as simple fright, but as the speechlessness that seizes prophets, disciples, and seers in the face of a theophany.

That hole in the rock
was their mountain of transfiguration
where they were stunned and
stricken with knowledge.
That gaping opening
was the dazzling darkness
teeming, roiling
pregnant with worlds.
It drew them in to see
and rendered them
wordless. 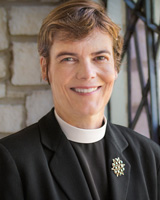 Cynthia Briggs Kittredge (@cbkittredge) is the Dean & President of Seminary of the Southwest.  She believes that historical and literary study of scripture in its ancient context can inform and nourish the imagination for faithful preaching and teaching. Professor Kittredge, a contributor to The New Oxford Annotated Bible and the Women’s Bible Commentary, is the author of Conversations with Scripture: The Gospel of John and Community and Authority: The Rhetoric of Obedience in the Pauline Tradition. She co-edited The Bible in the Public Square: Reading the Signs of the Times and Walk in the Ways of Wisdom: Essays in Honor of Elisabeth Schüssler Fiorenza.